Bellewstown Racecourse today announced the inaugural Barney Curley Charity Cup which will take centre stage at their race meeting on Wednesday September 28. This is the first of what the County Meath racecourse hope will become a very special fixture on their annual calendar and follows on from the hugely successful Barney Curley race day at Bellewstown last September which raised over €100,000 for Barney Curley’s charity Direct Aid for Africa (DAFA).

Legendary Italian jockey Frankie Dettori will return to Bellewstown Racecourse to manage the away team while champion jumps trainer Willie Mullins will take charge of the home team.

Two teams of seven riders will go head-to-head over two races, generously sponsored by Gannon City Recovery & Recycling Services Limited and The Gallagher Group. Points will be awarded to the first eight placed horses on a scale of 15, 12, 10, 8, 7,6, 5, 4 and the team that accumulates the highest number of points across the two races in the challenge will be deemed the winner of the Barney Curley Charity Cup.

Tickets are available to purchase online at www.bellewstownraces.ie and are €20, €10 of which will be donated to DAFA, which Barney set up in 1996 to support the underprivileged people of Zambia.

Vincent Maguire, Direct Aid For Africa Secretary, said: “I’ve been looking forward to the Barney Curley Charity Cup at Bellewstown for weeks now. Apart from being two of the world’s greatest racing personalities, Willie Mullins and Frankie Dettori were wonderful friends with Barney and supporters of DAFA. In particular, Frankie has helped us raise thousands of euros which has helped the poorest of the poor in Zambia. Bellewstown Racecourse are to be congratulated for the innovation and enthusiasm they have shown in helping DAFA. Last September was an unbelievably special day so let’s hope the inaugural Barney Curley Charity Cup race day produces another memorable occasion. Bring it on!”

Alan Delany, Vice Chair of Bellewstown and event organiser, said: “In 2021 we had a very special race day at Bellewstown in memory of Barney Curley and we are very keen to remember his special association with Bellewstown and continue his legacy, and the wonderful work of DAFA. We are delighted to have Frankie and Willie on board as team captains and we are eagerly awaiting their team announcements. Thanks also to Barney’s friends Tony Gannon and Pat Gallagher for their continued sponsorship – the Gannon City Recovery & Recycling Services Limited and The Gallagher Group Handicaps are going to be two very special races on Wednesday September 28.”

Frankie Dettori commented: “I’m looking forward to coming back to Bellewstown on Wednesday September 28 for the Barney Curley Charity Cup in memory of my great friend and to support his wonderful charity DAFA. I was delighted to win the 2016 Irish St Leger for Willie Mullins on Wicklow Brave, but I’ll be selecting my team very carefully to try and beat Willie and his home team. Both of us will want to win the challenge, so I can guarantee it’s going to be ultra-competitive.”

Willie Mullins, Champion Jumps Trainer, said: “Frankie Dettori is one of the most competitive jockeys in the world and I know Barney was such a good friend of his, so the home team jockeys, and I will have our work cut out for us. Barney was one of the great racing characters and did such fantastic work with DAFA, so I’m honoured to support the inaugural Barney Curley Charity Cup and hopefully we can keep the cup at home. It’s going to be a great day.” 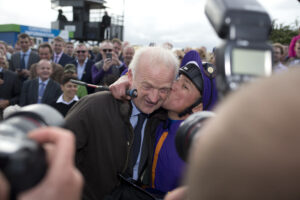 Frankie Dettori celebrating with Willie Mullins’ after the pairs win with Wicklow Brave in the Irish St Leger
The Curragh Photo:Patrick McCann

About the Author: Bellewstown Races